Yes I know it has been a bit since I have wrote ( as Pamela was reminding me) but my last workshop was so crazy that it took me a little while to write about it.

I taught my first official workshop in Kobe Japan two weeks ago. I was invited by my friend Tomoko to teach at a new studio belonging to a friend of hers called koBEYOGA. We set a date way back in June and I just thought I would teach during my layover as the workshops in Japan are only 1 and 1/2 hours. I could work an Osaka flight on a weekend and then just catch the train to Kobe, teach and get back to to the hotel in time for a nap before flying out again. Well- how does the phrase go?…”if you want God to laugh tell him your plans…” or something like that. Yes- something like that- something exactly like that.

You see, I gambled on the fact I could hold an Osaka flight- and two weeks before the workshop the worst happened…I did not get that flight. I was outbid by senior flight attendants and wound up on a Narita flight. Ok – breath- maybe one of the three flight attendants on Osaka would switch? Surely one of them would? No- not a chance. I was in a canoe and no paddle- and going downstream fast!

Now most of you would say- “Oh – so I guess you called and cancelled the workshop.” No – I did not. I made a very difficult, crazy  and expensive decision. I would fly to Osaka (southern Japan) on my Narita layover (Central Japan) and teach the workshop. I have done some pretty crazy spontaneous things in my life but I have to say this ranked up there at the top. For those of you that know about canoeing, I had no paddle so what do you do? You gunnel hop. You put on foot on either side of the edges of the canoe and you start hopping: I gunnel hopped my way across Japan. Nuts.

I spent about 10 hours on the computer doing research and making a time line and checking prices and finally came up with a plan that just might work- just– if one plane was late or one bus was late I would not make it back to work the Narita flight home. I spent more than I would make on the workshop on bus and plane tickets and prayed that Grace would take pity on me. ( and I promised her I would never do something like this again!) I put my canoe into the river of Grace and just kept hopping.

I packed my bag as light as possible and figured the clothing changes I would need on route ( uniform, yoga clothes, street clothes) and headed off to my flight. My two girlfriends on the flight knew what I was up too incase anything went wrong or they needed to find me. I got off my working flight in Narita and waited an hour and a half to catch a flight to Osaka Itami Airport- just under an hour and a half. I then took a bus to Osaka and stayed in my fellow flight attendants room in Osaka- she was at a friend’s house for her birthday which is why she could not switch her flight with me. I finally feel asleep late at night and then woke up early to practice and look over my notes. I then met my friend Tomoko at the train station and took a train for 35 minutes to Kobe.

We walked about 10 minutes to the studio. It was in the lower level of a building and was beautifully cool after the 38 degree weather outside and smelled of new wood. Lovely. The owner Nobu-san enthusiastically greeted me and I felt immediately at home. My workshop was called Learning to fly- Realizing your Unlimited Potential and it was an arm balancing wokshop. I wanted to get the students to try something new and challanging but attainable. I found arm balancing very empowering for myself and for my students over the last few years and I really wanted to give the Japanese students a taste of what Anusara could offer. I wanted them to work hard but feel good and if possible…laugh. If you think that dosen’t sound too hard you haven’t been in a room of serious Japanese yogis. Laughing is not a naturally occuring thing….

It started off serious and quiet but by the end of it we were all laughing and arm balancing away. The Japanese students are amazingly quick learners. In an hour and half we did – bakasana, parsva bakasana, eka pada koundinyasa, eka pada bhujasana, astravrakasana. They did them all- some just getting a toe up and others rocking it out – and many had never arm balanced before! My Japanese was a mess as I stumbled through a world of unfamiliar vocabulary but I seemed to get my message across. After the workshop the  students told me they could “truly feel my heart”. I was so happy and deeply satisfied with what little I had to offer- it still made an impact. 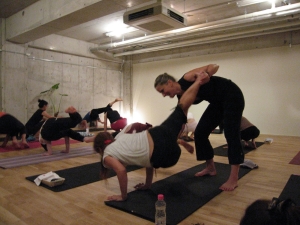 After all of it was over my husband asked me,”Was it really worth it?” and I would say yes, it was. The greatest gift of teaching is not the money you make or getting a recognized name- it is the look on a student’s face when you see them do something for the first time. They realize that they always had the key- you just showed them how to turn the lock. What a gift.

No more canoes for a while.

One Response to “Kobe Craziness”