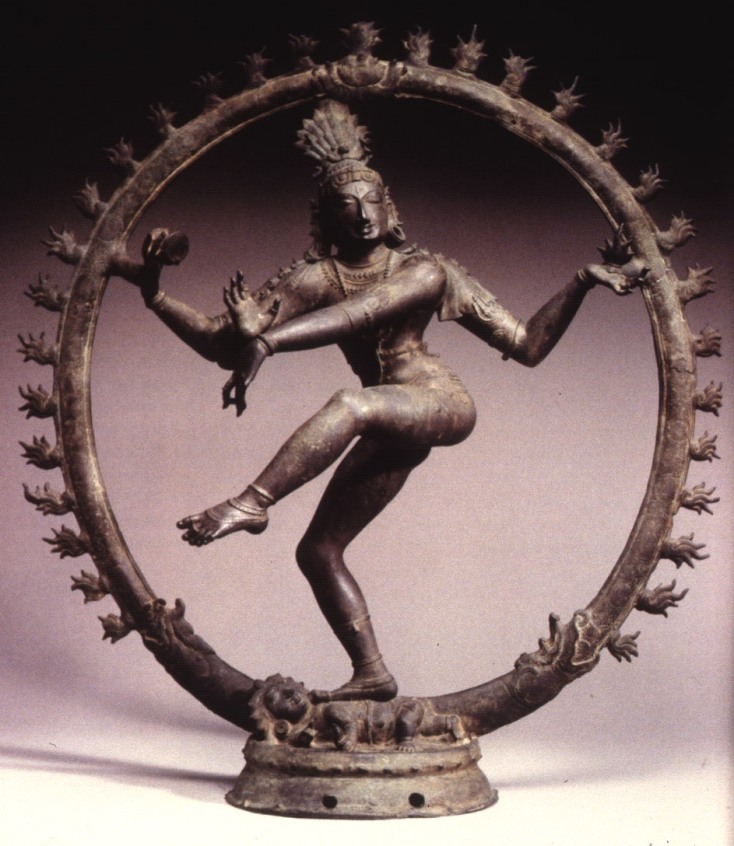 I promised a month ago I would write about the Nataraj and some of John’s interpretations he gave us in Montreal. I will add some more information I have gathered from research and hopefully it will give you a fuller picture of this iconic statue.

My first encounter with the dancing Shiva was as a teenager reading William Deverel’s book called ” The Dance of Shiva” . It opened with a tale of Shiva’s dance of creation and destruction and then becomes this disturbing Jones-town like murder suspense novel. Let’s just say I didn’t see Shiva as the guy I wanted to worship…..

As time has gone on, Shiva’s story as the Nataraj has become one that I now have a better understanding of. In some ways it is still as disturbing and brutal, but when one sees destruction as destruction of ignorance and evil, and death as the natural cycle of life, then there is a fuller comprehension of the Nataraj as a symbol of the whole realm of the manifested world, which by default we sometimes see as disturbing and brutal. In Anusara, we look for the good, so I chose to now see Shiva in his dancing form as destroying all that keeps me from knowing my true nature and that when I have a revelation of Grace I too dance in bliss like Shiva. ( Well, maybe I dance in my heart rather than around the room but you get the point….) Shiva is like a guy who is a bit of a bad ass, the wild guy your mother dosen’t want you to date,  but has a really good heart.

The story of Shiva in his form as Nataraj has many different mythological origins. One of the more common ones is that Shiva becomes embroiled in a flight with a group of rishis living in the forest. During the fight the rishis create different weapons one being in the form of a tiger. Shiva quickly slays it and wears the skin as clothing. They then create a serpent which Shiva slays and wraps around his neck three times like a garland. It is said in this tale they also create the demon dwarf- Apasmara- purusha-which he slays by stepping down and breaking his back. Other stories say that Apasmara was terrorizing people who then prayed to Shiva to save them.

As the Nataraj, Shiva is shown in the Anandatandava– the dance of Bliss.  Even in Indian dance today a tandava has the following elements:

In Shiva’s form as Nataraj, all these elements are present: they are the 5 acts of Shiva.  First he is surrounded by flames. These flames represent wisdom and truth- that which sheds light. In the upper right  hand, Shiva holds the drum known as damaru which represents the creative input of the universe. From the stillness comes the first sound, the rhythm that accompanies Shiva’s dance. It is the pulsation of the universe -Spanda. I have also read that the drum being shaped like two triangles with their points touching represent shiva and shakti and their relationship which manifests the material world. The drum is the primordial sound that emanates from the stillness.

Shiva’s upper left hand holds a flame representing destruction, dissolution or dissolving.  Notice how both the upper left and the upper right hand are on the same line so that creation and destruction are both equal to each other. The second right hand is in the form of a mudra called Abayamudra– the non-harming mudra. It can be interpreted as showing Shiva as a protector- one that you can take refuge in. The second left hand is crossing the heart and the hand is pointing down to the lifted foot. It reminds us that the heart has the power to remind us of Grace. The lifted foot represents anugraha– the revelatory power of Grace. It is in the forefront which shows us that it is more primary and holds the greatest significance.

The standing leg sits at the exact middle of the figure- it is stittihi– the middle- it represents preservation and it’s power holds down the demon of ignorance and forgetfulness, Aspamarapurusha. Shiva’s dreadlocks are wild and outstretched in the Nataraj ( this photo dosen’t represent that as well as others) to represent the ongoing pulsation and wave like movement of the universe. If you look carefully at his face though, in opposition to his whirling body, it is completely serene. With his eyes half shut , Shiva is in the Turiya state of pure consciousness of spirit. Yet even in this state, he is moving wildly. He is in the hub and the periphery simultaneously. This is the ultimate goal of the yogi- to be both at the same time.

One of the things that John mentioned that I had never heard of is that Shiva is very anglular in this form and that the bends in Shiva’s dancing form represent Maya. Maya we mostly come to  think of as illusion or the ” magic mirror” but originally it  meant the power to measure and John pointed out that all forms are in ratios of 1.168- the golden measure. The perfection of the universal is shown in the manifest. As Carlos Pomeda once said, “the world is telling me about the divine”.

Shiva’s manifest form as the Nataraj therefore is telling us about the divine. We see the 5 acts of Shiva in the form, but it is even richer than that. It begins to show us the deeper meanings of yoga and yogic life. I like to think that the Nataraj is a re-enforcement of chosing to stay in and of the world while still maintaining a higher awareness and doing appropriate action. Can I be whirled around in the dance of life and still hold to the centre? I am trying.      OM NAMA SHIVAYA………